Formed in 1992 by world-renowned juggler Sean Gandini and champion rhythmic gymnast Kati Ylä-Hokkala, Gandini Juggling continues to be at the vanguard of contemporary circus.The company is one of the pioneers in using contemporary dance and mathematical notations in the field of juggling. Having performed in over over 4,500 shows in 40 countries, Gandini continue to be programmed at the most prestigious festivals and venues across the world. The company are constantly creating new works from radical fusions of art and juggling, through theatrical juggling performances, to family friendly entertainment.

Sean Gandini
As a child growing up in Havana, Sean was fascinated by Magic and Mathematics. In the 1980s, he was a regular performer in London’s Covent Garden and toured with various theatre groups. Since then, Sean has spent the last 25 years researching and contributing to all aspects of juggling; he is a prolific creator and his work also extends to choreography and directing. With Gandini Juggling, Sean has performed in over 2,500 shows from art galleries to palaces; street corners to stadiums. He also regularly teaches in many of the world’s leading Circus Schools.

Kati Ylä-Hokkala
Kati is one of her generation’s iconic jugglers. Renowned as one of the leading innovators in dance/juggling, her ability to combine movement and extremely complex coordination is second to none. A former rhythmic gymnast, Kati’s juggling has a unique calm precision which comes from 25 years of throwing whilst standing on one leg. In recent years she has co-directed many of the company’s pieces.

Gandini Juggling has been set up to celebrate the art of juggling in all its facets, fuelled by a belief that juggling is an exciting living art form. During the last past 19 years, the Gandinis have performed over 4,000 shows in 40 countries and are in constant worldwide demand for their virtuoso juggling and breathtaking choreography.This sophisticated slice of large scale juggling theatre was premiered at the London National Theatre Festival “Watch This Space” in July 2010. “Smashed” is a full evening performance involving nine jugglers and a hundred apples, cross referencing German Contemporary Dance and 1980’s Street Theatre. Directed by Sean Gandini, it could be defined as a darkly humorous journey building to a frenetic finale. Through “Smashed”, the two artistic directors Kati Ylä-Hokkala and Sean Gandini present the world under an utterly subjective perspective, violently distorting reality to obtain an emotional effect and vividly transmitting their personal moods and ideas. Composed of tableaux vivants that give a sense of old photographs; echoing world wars, tense relationships, lost love and innocence, nostalgia and the quaintness of afternoon tea, this Bauschian Tanzjonglage performance culminates with a cathartic smashing of apples and breaking of crockery. 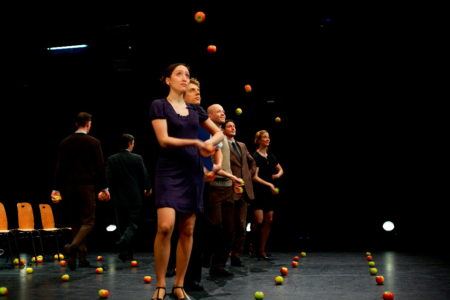 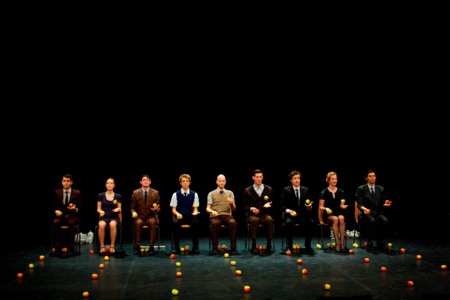 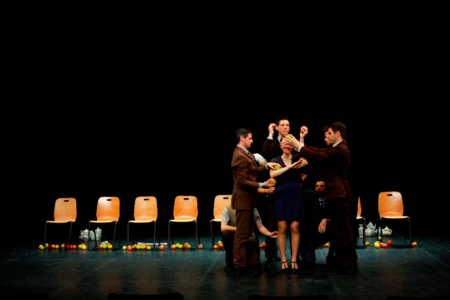 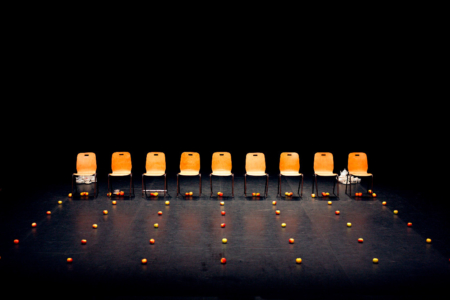 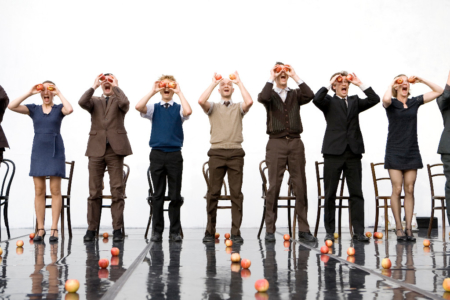 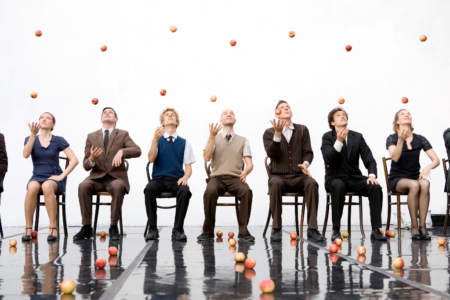 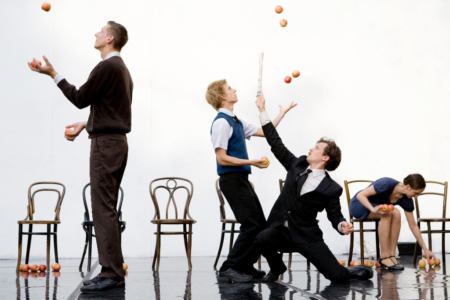 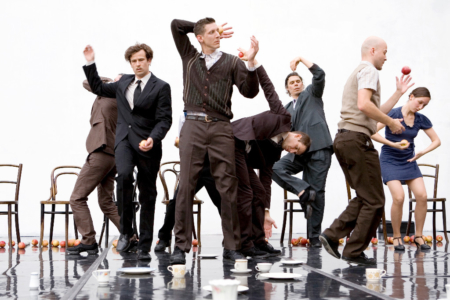